The former did not happen, the latter did.

I know. I can barely believe it myself. It came about because my husband won the holiday, and was insistent that I was going to be his cabin-mate, despite me googling boat-loving Captain Birdseye, and Tom ‘Howards’ Way‘ Howard, to see if they were free.

I’m not a fan of water, long journeys and organised fun. How could I ever enjoy it? And the fact I did, absolutely messed with my head. What other amazing events had I missed out on because I think I know myself? What other opportunities had I turned down because I wasn’t brave enough to just give it a go?

Anyway whilst I wrestle with these big life questions, here are some things I’ve learnt about life on the ocean wave:- 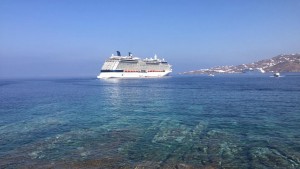 1. Everyone on cruises is obsessed with everyone else’s cruise holidays.

This is where me and Mr Roo fell down, conversation-wise. Tales of a French trip where you vomited on a Sealink Ferry are not going to cut it.

2. You can never be over-dressed at dinner.

I’ve seen royal weddings which looked positively shabby if compared with the formal evenings on a cruise. People are really going for it, and the ship must have to factor in a ‘sequin and diamanté weight tolerance’ to ensure it can float.

We went for a walk around the ship on day two, to be confronted by a group of people being shouted at: “…you’ll appear as zombies from behind a sunlounger, so remember to jerk, thrust and howl.” We had stumbled on a rehearsal for a Thriller flash mob. As you do…

4. Gemstones you’ve never heard of will become a minor obsession.

Pre-cruise I’d never heard of zultanite (I spent two days mistakenly calling it vulcanite, the consequence of watching a Star Trek movie a few days before); by the end of the trip I could have made it my specialist subject on Mastermind, or blagged my way onto Gems TV at the very least. We saw short informative films about it on the ship’s channel, there were on-board sales, raffles featuring it, and then during a short trip into Turkey we saw so much of it, we could have picked it out in a semi-precious stones line-up.

5. If you get married on a cruise ship, you’ll have to do ‘the pose’

You’re at sea having one of the most romantic days of your life and the photographer will make you go the full Dicaprio and Winslet, by doing the arms wide pose from Titanic. That’s right – the film where the ship sinks, people lose lives and the romantic hero dies. WHAT BETTER MEMORY FOR YOUR ALBUM?

6. People will talk to you ALL the time.

Mr Roo and I talk a lot to other people in our everyday lives, so we are never looking for buddies on holiday. We are content to chat to each other at dinner, and have come home from every single break taken together without an address/email of a fellow holiday-maker. We had not factored in the natural curiosity of the cruise-goer. It started on the ‘plane to Rome (fellow passengers were on our flight and tags marked us out) and did not stop. Most conversations were brief but one led to a friendship. The magnificent Ron and Marian from Melbourne were one of our favourite things about the whole trip: well travelled, funny, energetic and great conversationalists, we loved bumping into them and shared a few dinners with them. I smile every time I think of them and hope we’ll stay in touch.

I constantly want to ask those people if they’ve ever been to an oil barons ball, so immediately stop drinking. I’d only need two G&Ts and I’d be pushing for a trip to Southfork to pay my respects to Jock and Ellie Ewing.

8. Your hands will never be more germ free

9. Power is an aphrodisiac

I knew this when my husband nicknamed our gracious leader: ‘Sexy Captain’. We’d not even seen him, but his accent made his daily messages about ports and wind speeds sound hot.

10. You will eat the equivalent of your body weight every day

There’s gourmet food in the restaurants, burgers and hotdogs on deck, and gelato ahondo. My culinary role model is Mr Greedy – so you can guess the rest. I managed a couple of runs on the trip, but that was mainly to give my jaw a rest ahead of my next snack. 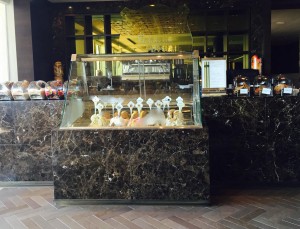