It’s Summer 1988. Perms are in, everyone still thinks George Michael is straight, and I am in love.

I’m also about to skip the last couple of days of term as I head off on a German trip.

My boyfriend gives me a tape* for my personal stereo* as he knows I am spending the best part of a day on a coach and ferry. My fifteen year old self is swept away by this gesture, and frankly it will change everything.

Later that day I am in the school car park. It’s dark and we are loading suitcases into the luggage hold of a coach. I get on board and after an hour or so of excited chatter, the coach starts to get quieter as many of the pupils fall asleep. I am still too hyper to relax, so I turn to music – early signs of a career to come. I get out my tape and load it in the player. I hear a driving beat…a staccato vocal:-

I just can’t believe
All the things people say, controversy
Am I black or white?
Am I straight or gay? Controversy

My boyfriend has taped Prince’s Controversy and Purple Rain from his original vinyl* copies, and has even dedicated one of the songs to me. This is even more touching when you consider I’ve had a perm that makes me look like a cross between Deirdre Barlow and Margaret Thatcher and it is so massive, I would struggle to go under a low bridge.

We’ve all pretended to like bands to impress a partner, but this is the real deal. I am utterly besotted with Prince and the fact I am also in love for the first time means it is a ridiculously heady experience. Hormones and harmonies are a potent mix.

Up until this point my Dad has been the main influence on my taste in music. He plays guitar and endears himself to me forever by playing Johnny B Goode off the top of his head when I return excitedly from seeing Back to the Future. He winces when I tape Stock Aitken and Waterman hits from the chart show, and makes it clear that ‘proper music’ involves guitar. On those grounds, it feels absolutely right to love Prince as much as I do.

He is my first stadium gig two years later. I dye my gran’s longline bra purple as I can’t afford a bustier top and wear it to the NEC. Yes, there was a photo; no you can’t see it. Fast forward nearly 3 decades later to when Prince does his gigs at the O2 in 2007, and I carry the bra in my bag as a lucky talisman and hope my bag doesn’t get searched. 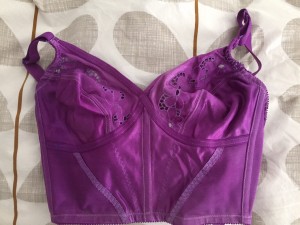 I see him on two of the 21 nights in London –  including the final one – and we then go on to the after-show gig. At one point Prince accompanies Amy Winehouse on guitar, and he then plays on until the early hours of the morning. As I leave the gig with my friend Paul, blinking in the early morning light and high on the genius of Mr Nelson, I realise that I may no longer be able to get into that longline bra without a winch and an industrial vat of Vaseline, but Prince’s music remains the perfect fit. Always.