I suppose you want me to say something fresh and exciting about Bridget; a hot take on singletons, fuckwits, smug marrieds, novelty jumpers, turkey curry buffets, or at the very least big pants.

Come the fuck on, Roo – anything?

2016 has taken away a lot of loved figures, and it is finally giving me someone back. This is about the simple joy of seeing an old friend after a long time. I sat for the first few minutes of the film with tears in my eyes at hearing that familiar voice and reconnecting with that world.

Much has been said about how Bridget is no longer an ideal role model for women in this day and age – but it is impossible for me not to love her – because she was one of the first female figures in film who felt anything like me.

Clumsy, worrying about how she looked and yet wanting to be accepted and loved just the way she was; valuing friendships and the family they create for us when we live away from home; being a bit rubbish at working out the right relationships first go and constantly trying to navigate a working world she sometimes felt ill-equipped for.

Bridget rang so many bells – reading the book and seeing the movie felt like a campanology convention.

I was in my 20s and single when the first film came out in 2001: I had just landed my dream job in radio of presenting a breakfast show, but I was a singleton with the odd feckless boyfriend punctuating my life. My life was in constant flux and it was hard to be content.

Here I am at the time in Tinkerbell wings (if you see the movie, you’ll realise it is strangely prescient) on the Butterfly Bridge in Bedford. I think we’re pretending they’re butterfly wings for synergy, but all I remember is that it was a publicity shot for the radio station’s website:- 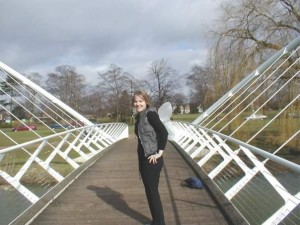 Between the time this photo was taken and the current film I got married.

Here – genuinely – is my husband’s first message to me:-

My friend Psychic Paul (a Tom in training if ever there was one) had written my dating profile and mentioned if my life was a film it would be Bridget Jones crossed with the Sound of Music. Hence that first message from my husband.

I replied telling him my pants weren’t as big as Bridget’s, and then a subsequent message apologising for bringing up underwear in my first reply.

When we got married, I wanted to reflect that first connection. We stood there waiting for the song to play and it failed. The DJ was mortified and apologised profusely (“…this has never happened to me before”)– whilst I asked our Sinatra impersonator to sing us another song instead.

The song that failed? Have you met Miss Jones?

Perhaps it was the universe sending out a message: I was Bridget no more. Or y’know, a scratched CD. Either way it was a punctuation point.

Fast forward to 2016 and Bridget who was older than me in the first film, is now the same age: 43. As it’s in the trailers and the title, I don’t feel I am giving anything away when I tell you Bridge is in the family way.

It would be lovely if I could tell you that life has once again mirrored art, but it hasn’t and it won’t. I have one husband and no baby – but I’m happy and I’m learning to love my life, just the way it is.