Love is an act of endless forgiveness – Peter Ustinov

Ten years ago I met my husband for the first time. We’d agreed to meet outside Borders the bookstore in North Swindon, and drank coffee in the Starbucks above.

My first impressions were that he was impossibly handsome and way out of my league. He remarked that I was tall, and better looking that the photo he’d seen online (which he’d liked).

We talked and laughed easily together, and then agreed to go to a pub near my home in Old Town. When we arrived I asked him to parallel park my car – he knew early on, what he was getting into.

We ended up going back to mine to watch the final of X Factor and we did not kiss. He ‘phoned one of his best mates after that date, and told him he had met the one; I wondered if I would ever see him again.

We fell in love very quickly, but we also fell into arguments. I think it is because of the eldest/youngest child dynamic, he thinks this is horseshit.

I am a thinker, a ruminator – Damian is a man of action. He says I live in my head too much, I say he doesn’t ponder enough on my emotional needs.

If you think this is a sign that we are incompatible – then you do not know love.

The things that drive me insane with anger about Damian are perversely the things that also make me laugh (retrospectively) the most. Have you ever had an irate man lecture you on how to hang underpants on the washing line? Or how to fold a towel? Or shout because you messed up his car boot packing plan by dumping your shoes in the place least pleasing to him?

On the one hand, fucking do it yourself mate, if you can do it better (actual internal monologue, which sometimes bleeds into exterior shouting), and on the other – I’m in awe that someone can have a strong opinion on this, and stick to it resolutely. I am chaos; he is order.

Only yesterday he tripped over three things I’d left around the house including hand weights, some bath mats and towels that need to go to textile recycling and a parcel (for another house) that was on the stairs.

He is driven to distraction by my ability to catastrophise, my low self-esteem and my inability to look at operations during Holby. Apparently someone repeatedly saying ‘can I look yet?’ does interrupt the narrative flow.

There have been times over the last ten years when it would be easier to run than stay. We are human, and we are subject to the same disappointments and sadnesses as everyone else.

But through everything: highs, lows and the bits in between where you have a thirty minute discussion about shades of grout – there has always been love.

I could not live with another version of me; I irritate myself too much. But I can live with a man who I respect hugely, who makes me laugh, and does all of my ironing. The fact that I can now be endorsed for towel folding on LinkedIn is a bonus.

Damian: thank you for ten years of love, my love. 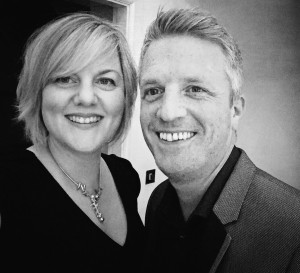