On a couple of consecutive days last month I lost two major influences in my life. I never knew either of them and yet that didn’t lessen the impact of their passing.

The death of the famous is a weird one. For every person who understands your sadness, there’s another who thinks you should just man up because they were strangers. If you’re in the latter camp, you should move along now and look at some cat GIFs.

Victoria Wood was probably the biggest influence on my desire to pursue a creative career. My friend Helen got it spot on when she identified that both 80s Smash Hits and Victoria Wood gave her a writing ‘voice’ – I feel exactly the same way. Yes, I watched and read other funny things, but those two probably had the most influence on my approach to humour until I found my own way.

At Sixth Form I wrote and directed a play for my friend Beck. She is easily one of the funniest people I know and loved Wood as much as me. I wouldn’t have even considered giving it a go if the great VW hadn’t shown me that women could generate their own material, and then get out there and perform it. 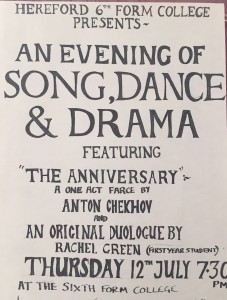 For that, I will always be grateful. Well that, and the many lines of hers I quote on a regular basis, with friends who are fellow fans of her work (and the side-winding thermal body belt).

I’ve written about my adoration of Prince before here, so let’s not go over old ground. I absolutely cannot get my head around the fact that he has gone, and I’m at the stage where I can barely get through a song without moist eyes. Clearly Prince influenced me in a completely different way to Wood – my musical ability is limited to a ropey recorder descant for One More Step Along the World I Go and London’s Burning in around.

What staggered me about Prince was the capacity for reinvention and little regard for what anyone else was doing. He forged his own path with an equal passion for spirituality and sex. He could be deeply serious (The Cross) and joyfully ridiculous (Jack U Off) and it all worked. Essentially you learn from his work that you should just go with what you are passionate about in the moment. And it is OK to change.

When I retired from full-time presenting I kept getting asked how I could leave it behind, when I had worked so very hard to get behind the mic. But I know that if something isn’t your passion anymore then you should evolve and adapt. I was deeply committed when I did it, but I don’t miss it now and find it easy to say no when asked. Maybe that will change in the future but if I’ve left it behind for good, that’s OK with me too. Prince gave me that.

On the surface Wood and Rogers Nelson have little in common – but they were both shy people who found their voice in creative endeavours. One of the deep frustrations of my life is when people conflate what you do with who you are. ‘Oh Roo, you’re a presenter, you’ll find getting up in front of people easy’

You know when you have to ask a question in a meeting? I force myself to do it, but often my heart is racing, my palms are clammy and I have to control my voice. I NEVER want to be the person who presents the findings of their group in training sessions – I *can* do it, but I don’t enjoy it. I’m not a sponge for everyone’s eyes on me. Former co-hosts will tell you that I was sometimes anxious before programmes and stressed prior to working on stage. I wanted it to be really good and that push for perfection means you are sometimes uncomfortable.

My husband knows I am twitchy and grumpy before parties because I fear that I am boring and will have nothing to say. And I barely ever look in mirrors between first thing in the morning and last thing at night as I don’t like how I look. I wash my hands with my head down and give a cursory glance at the mirror but never get too close.

No one has ever described me as shy but I am not 100% bullet proof confidence either. I think performers like Victoria Wood and Prince made me realise you don’t need to be a show pony 24/7. An eternal relief really, as I don’t have the strength in my wrists for continual jazz hands.

If losing those you don’t know hurts, then it redoubles your appreciation for those you do. I can’t be the only one who has spent most of 2016 being forced to consider their own mortality and that of their nearest and dearest.

Forgive the grudge, embrace the good, and love your loved ones harder. Most of us will never have the global influence of Prince and Victoria Wood, but in our own circle of family and friends we can make all the difference in the world.